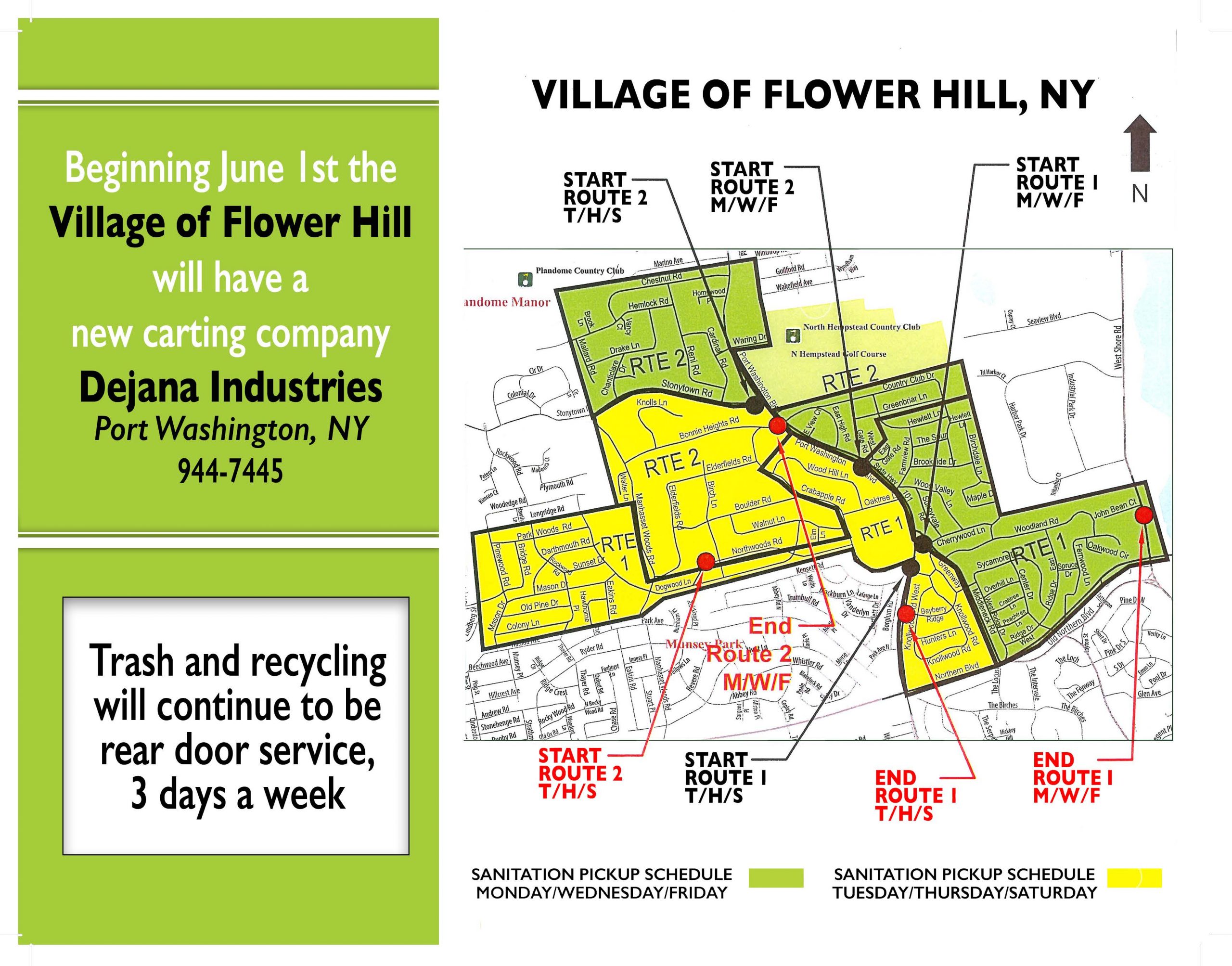 Taxpayers will save $900,000 during the term of the contract while retaining service levels

At the May 3rd Board of Trustees meeting, Mayor Brian Herrington and the Board of Trustees unanimously approved a new five year garbage contract in response to the Villages Request for Proposal (RFP) for sanitation and recycling services.

Flower Hill’s 3-year contract with their current garbage carter was set to expire, and under the New York State General Municipal Law whereby any services contract with a municipality in excess of $30,000 must be put out to public bid, the Village was required to accept the lowest responsible bid.  The lowest responsible bid received was from Dejana Industries, saving Flower Hill taxpayers $900,000 over the term of the contract compared to the next bidder Meadow Carting. With an increasing amount of garbage being moved off of Long Island and softening in the recycling market expenses continue to rise.

“I am proud to announce the awarding of the contract to Dejana Industries that saves the Village money while retaining the same level of service. I want to thank Meadow Carting’s Staff for their dedicated service to our residents, they will be missed. DeJana has committed that residents will continue to see the same level of service with some enhancements. State law and the way the bids came in did not give us a lot of room to negotiate. We did our due diligence and I think this is the best outcome for our residents from a financial and a service perspective. ” said Mayor Herrington.

Trash and recycling will continue to be rear door service, on the same 3 days a week they currently have. Dejana’s trucks will have conspicuous separate containers on the front and sides of their vehicles for paper and plastic recycling, so there will be no mixing of regular garbage and recycling as had occurred at times in the past. Dejana’s service yard is located nearby in Port Washington, which will allow them to be available to us in a timely manner.

DeJana will take over pick up on June 1, 2021 but until then Meadow Carting will continue to service our residents. Residents are encouraged to contact Village Hall with questions or concerns.

About Dejana Industries: Dejana Industries, Inc. is the first of the “Family” of companies founded by Peter Dejana, the chairman and chief executive officer, as a landscaping business back in 1962. Over the years the company has grown into a family of affiliated operating companies that provide a broad array of services throughout the Mid-Atlantic, New England, Midwest, and as far west as Denver, Colorado.